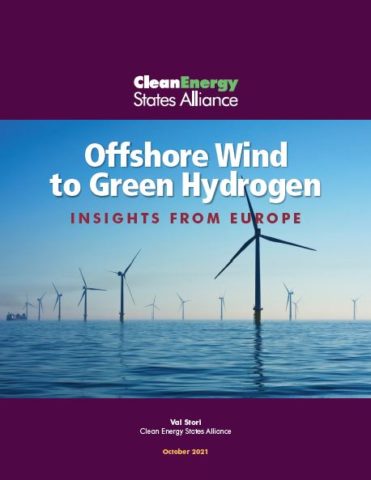 This report explores Europe’s approach to green hydrogen development and unpacks the opportunities and barriers to its rollout.

Europe is using strategy development, policy, and demonstration projects to advance “green hydrogen” – hydrogen that has been produced from clean, renewable energy. Europe has considerable offshore wind already installed and a 70-gigawatt target for 2028. This strong and established industry could play an important role in the production of green hydrogen. Green hydrogen proponents tout it as a means to decarbonize hard-to-abate sectors and industries, as well as serve as a grid-scale, energy storage solution that could offer reliability, flexibility, and stability benefits.

This report provides an overview of the plans, strategies, proposals, and challenges for the development of green hydrogen from offshore wind generation in Europe. It describes the current policy drivers facilitating its development, as well as potential future support mechanisms, value streams, and market barriers. It examines the cost, safety, and emissions impacts of green hydrogen admixtures. It includes case studies of European hydrogen strategies and pilot projects.

The report concludes with implications for the US. It notes that the US is at a much earlier stage of offshore wind development than Europe and that US wind farms’ output will be fully needed for electricity production that displaces fossil-fuel generation for at least the next decade. The report encourages states and the federal government to resist efforts by fossil fuel companies and utilities to use the long-term vision of a hydrogen future as a rationale for extending the life of natural gas infrastructure. Using hydrogen for power generation raises concerns about emissions of nitrogen oxides and risks prolonging the impact of peaker plants on frontline communities.

This report was made possible thanks to support from Barr Foundation.