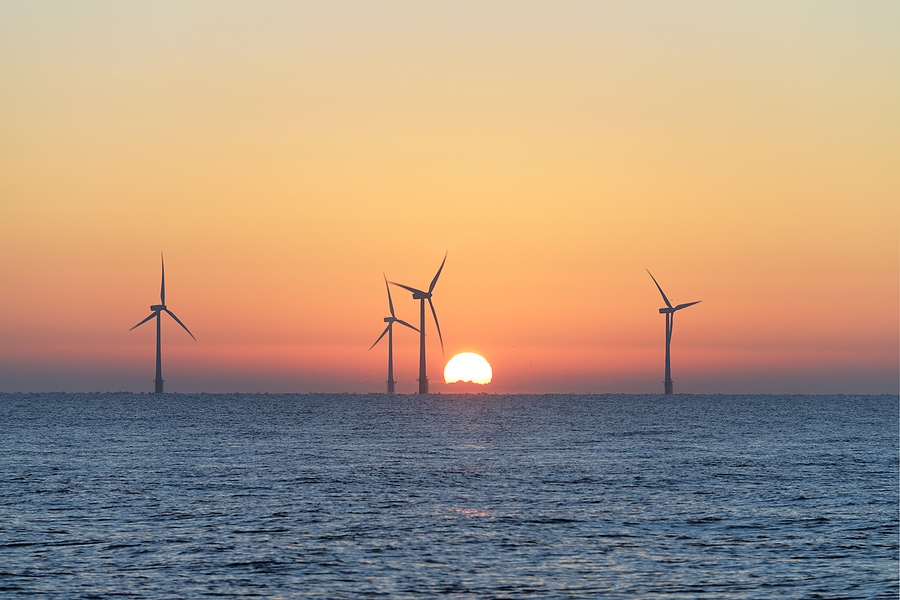 The Clean Energy States Alliance recently released a new report that looks at the development of green hydrogen (H2) from offshore wind. Georgena Terry chatted with report author Val Stori to glean some of the highlights from the report.

GT: How might green H2 fit into the energy system?

VS: Traditionally, hydrogen has been industrially produced from the methane contained in natural gas, releasing carbon monoxide and carbon dioxide in the process. This hydrogen is referred to as “grey hydrogen.” However, renewable electricity could be used for hydrogen production by powering electrolyzers that separate water into its components–hydrogen and oxygen. Hydrogen from electrolysis powered by renewables is known as “green hydrogen.”

Hydrogen is an energy carrier rather than a renewable energy technology. It could have an important role to play in decarbonizing difficult-to-electrify sectors like industry, maritime transportation, and aviation. For example, green hydrogen could decarbonize energy-intense high-heat industrial processes that currently rely on grey hydrogen.

GT: What is the potential role of offshore wind in European hydrogen production?

VS: Compared to other renewables, offshore wind has a high capacity factor, which enables an electrolyzer to operate for a greater amount of time. Hydrogen can be produced either on-turbine, on a centralized offshore platform, or on land. Hydrogen that is produced offshore can be transported back to shore via pipeline. Alternatively, an electricity cable can connect the offshore wind project directly with on-shore electrolyzers. Hydrogen can be used to store offshore wind until the energy is needed or it can be sited to create electricity at points where it is needed.

GT: What are some of the factors behind the strong interest in offshore wind to H2 in Europe?

VS: There are several. First, it’s important to acknowledge that, compared to the US, Europe has had nearly a 30-year head start in developing and operating offshore wind projects. They currently have 25GW constructed and a target of another 27+GW by 2040. In addition to its strong offshore wind resource, Europe has ambitious decarbonization policies—the EU has a carbon emissions reduction goal of 55% by 2030 compared to 1990 levels, which means renewables will be on the rise. In addition, they have substantial port infrastructure with industrial clusters. Lastly, because the next generation of offshore wind projects will be farther out at sea, there will be longer connections to land and some of the interconnection locations will be in places where the onshore grid infrastructure is weak. These are some of the main factors driving the consideration of offshore wind to hydrogen.

And while it may seem like there is rapid green hydrogen development in Europe, many of the government policies and strategies lay the groundwork for the conditions that will begin developing the market around 2030. These strategies seek new approaches for integrating vast amounts of renewables, including the additional 27+GW target for offshore wind, through hydrogen deployment and its opportunities for green economic growth. Europe’s hydrogen strategy includes ambitious targets for installing green hydrogen electrolyzers. At the national level, countries are adopting their own hydrogen strategies. The Netherlands, for example, plans to deploy 3-4GW of electrolyzer capacity by 2030 and Germany, 5GW.

GT: Could you give us a country-level example of the offshore wind to H2 nexus?

VS: In the report, we included a case study of Denmark’s unique green hydrogen proposition. Not only is the country well on the road to decarbonizing its electricity sector (80% of its electricity supply comes from renewables, of which nearly 50% is from wind), but it also has developed vast amounts of offshore wind to the extent that it has become cost competitive with fossil fuels. By 2030, it plans to have 6GW of installed offshore wind capacity and to invest in green hydrogen and other green synthetic fuels to start decarbonizing the 30-40% of its economy that is challenging to electrify. This could include transportation applications such as long-distance trucking, shipping, and aviation.

GT: There’s been a lot of recent press coverage in the US about hydrogen. What do you think are the prospects for offshore wind to H2 in the United States?

VS: There are currently only seven offshore wind turbines located off the coast of the United States with a total capacity of 42MW. At this point in its evolution, offshore wind in the United States needs to be focused primarily on generating electricity to displace fossil fuel generation. While green hydrogen may have a role to play in supporting economy-wide decarbonization, offshore wind should continue to be used for electricity until there is enough excess wind output to devote wind resources to hydrogen production.

GT: What can the states be doing to plan for green hydrogen?

VS: I think planning now for potential future green hydrogen development is the most important step states can take. We need to be asking “why” do we need green hydrogen? Does it help us achieve a just clean energy transition and how? With these answers, states can begin crafting policies and programs to ensure that the market develops in ways that are equitable and that support decarbonization.

One thing I’ve learned from all the research that went into drafting this report—and one that is not much talked about in Europe—is the potential for increased NOx emissions if we were to burn hydrogen—of any color—in power plants. Producing hydrogen is an energy-intense process, so it should be used in highest-value applications. That would be for the hard-to-electrify sectors, not the power sector, and especially not to keep power plants alive beyond their reasonable life expectancy. This would only perpetuate the environmental, social, health, and economic harms that have been disproportionately affecting frontline communities for decades.

The first steps the US can take are to prepare for using hydrogen in the future. Certainly, the EU’s experience will be invaluable, and we in the US should keep tracking developments there. We’ll need ongoing research into hydrogen technologies and hydrogen’s potential applications. Policies and incentives used by the EU can be studied and evaluated for ways they might apply to the US market for hydrogen, especially as they relate to grid reliability. And we should keep front and center that the energy transition has an opportunity to be—and it must be—equitable. How can green hydrogen support this vision?

How can we learn more about green hydrogen and its development in Europe?

To learn more about Europe’s approach to the hydrogen economy, join CESA on November 9 for a webinar discussion with report author Val Stori and contributor Lee Wilkinson.